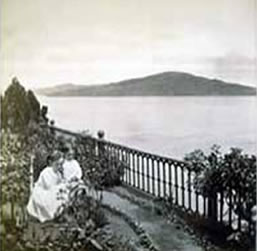 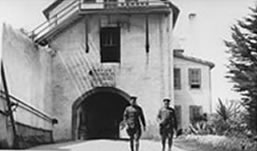 Planted by successive generations of inhabitants, from Civil War soldiers and civilian criminals to the families of officers and guards, [the island’s plants] provide clues to the aspirations and yearnings of those who once lived here.”

History of Gardening on the Island

Before human settlement, Alcatraz had only a thin deposit of soil that supported sparse native grasses and shrubs. The island was first inhabited in the mid 1800s when it was used as an army fortress, but it soon transitioned into a military prison in 1861. In an effort to make the barren island more livable, the military began importing soil from nearby Angel Island and the Presidio, and as early as 1865, planted Victorian-style gardens adjacent to the citadel on the summit.

In the 1920s, the military and the California Spring Blossom and Wildflower Association initiated an islandwide beautification project, and prisoners planted hundreds of trees and shrubs and many pounds of seeds. Plants and structural elements from the gardens of the military era are still in place today.

In 1933, when the federal Bureau of Prisons took control of Alcatraz, Secretary to the Warden Fred Reichel began caring for the gardens left by the army, which by then included hillside terraces, a rose garden, and a greenhouse. Reichel convinced the warden to allow prisoners to garden, and with the advice of prominent California horticulturists, helped to direct the transformation of the island’s western slopes into a series of gardens. In 1941, prisoner Elliott Michener began a nine-year career as an inmate gardener—he built a toolshed and a greenhouse, received permission to order seeds and bulbs, and credited this experience with providing him a “lasting interest in creativity.” During the federal-prison years, the former Officers’ Row became the central garden on the islands’s east side.

The island’s gardens were abandoned after the federal prison closed in 1963. From 1969 to 1971, Native Americans occupied the abandoned site, and in 1972 the island became part of the National Park Service’s Golden Gate National Recreation Area. Plants unable to survive without maintenance and irrigation soon disappeared, while others spread wild over the island. Structural elements of the gardens—including retaining walls, steps, and railings—deteriorated under the overgrowth. Until recently, the sense that gardens were an essential feature of the island’s history had almost been lost.

In 2003, the Garden Conservancy, Golden Gate National Parks Conservancy, and National Park Service began a collaboration to restore the gardens. The team continued preservation planning efforts initiated by the NPS in the early 1990s. After preparing a comprehensive cultural landscape inventory, which documented the history of the island’s gardens, the team prepared preservation plans for five garden areas. For a brief history of each garden area, go to the Virtual Tour. The award-winning restored gardens include historic plants still on the island and newly introduced plants with maintenance and cultural requirements that fit current conditions. To view photos of the gardens before and after rehabilitiation, click here.

For more information on the history of Alcatraz, visit the Golden Gate National Parks Conservancy site and the National Park Service site.

Visit the Gardens of Alcatraz

What’s happening in the gardens?

What’s blooming in the gardens?

View Before & After Photos